I can't believe it's the end of another year!  This keeps happening, doesn't it?  Christmas has come and gone, and with it a couple more finishes -- for one of which no picture exists at the moment.  But anyway, I will show my first, big project.  It's this. 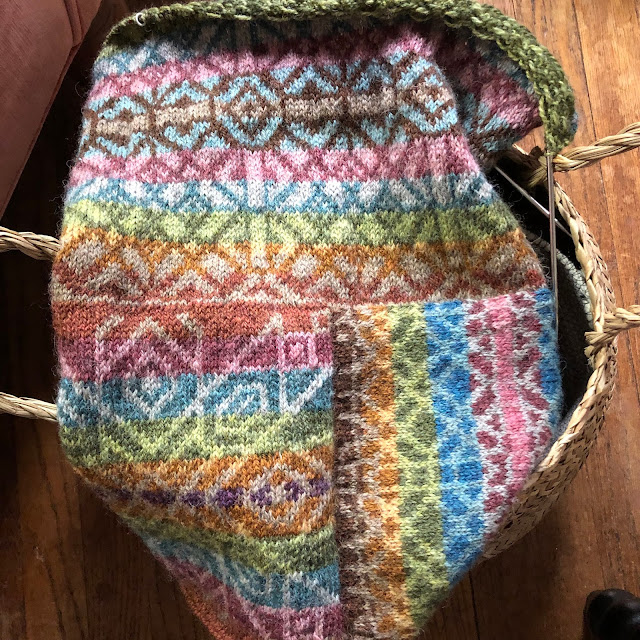 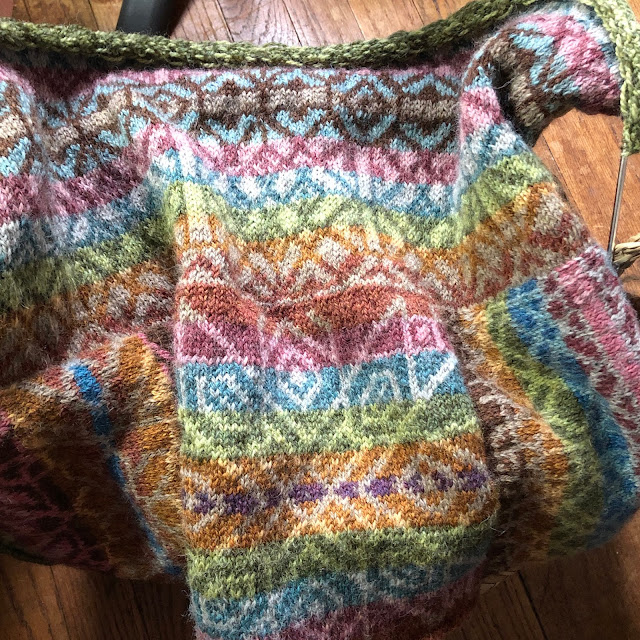 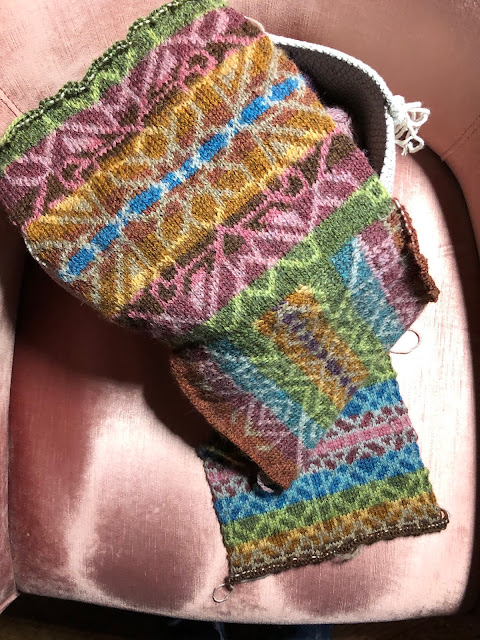 It's Marie Wallin's Fair Isle Club 5 blanket, the Moroccan Tiles Throw.  I'm using the kit for the throw, and I do love the colors.  For the first time, I'm knitting color work flat!  I followed Marie Wallin's advice and am working the purl side using her simpler drop and pick up method, as opposed to trying to do it two handed as I usually do color work.  I found in the past that if I try to do two handed color work on the purl side, for some reason my tension is ridiculously loose and just doesn't work out.  So Marie Wallin's method it is!  I'm enjoying the knit, although I have to be aware of my tension and keep on the alert.

Next, my finished hat -- at least one of them.  I finished the Mill Hill Toque by the same designer, but have not taken a pic on the owner's head yet (DH's).  But here is the Botanical Beach hat, on DH's head even though it now resides on DS's head and in DS's home. 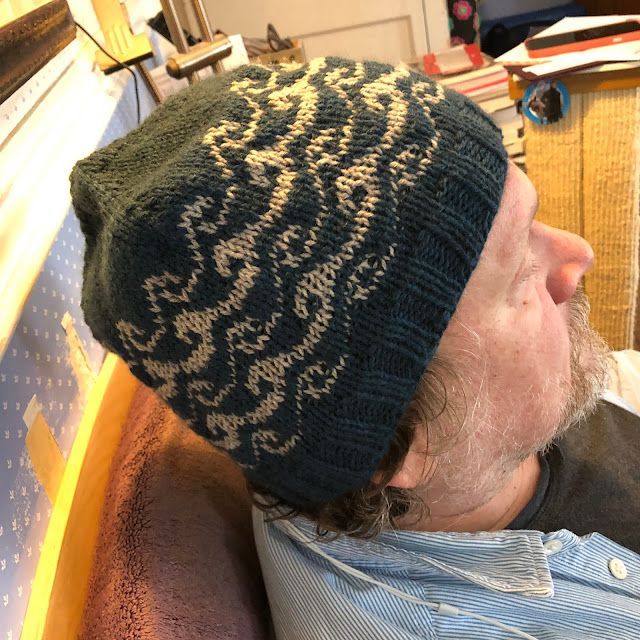 I managed not to get a picture of the recipient in the hat before he left.  Sigh.

I also knitted the Nice and Knit Beanie, using a skein of their yarn.  I enjoyed the mindless knit very much. 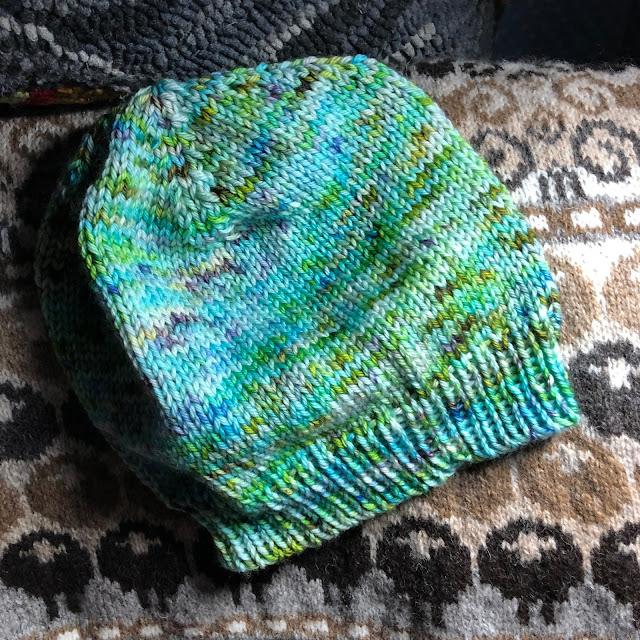 I need to find a nice, fluffy pompom for it, or make one -- if I can find my pompom maker.

Christmas was very nice, if way too short.  Mia, of course, disapproved, taking up her usual spot on the back of the rocking chair. 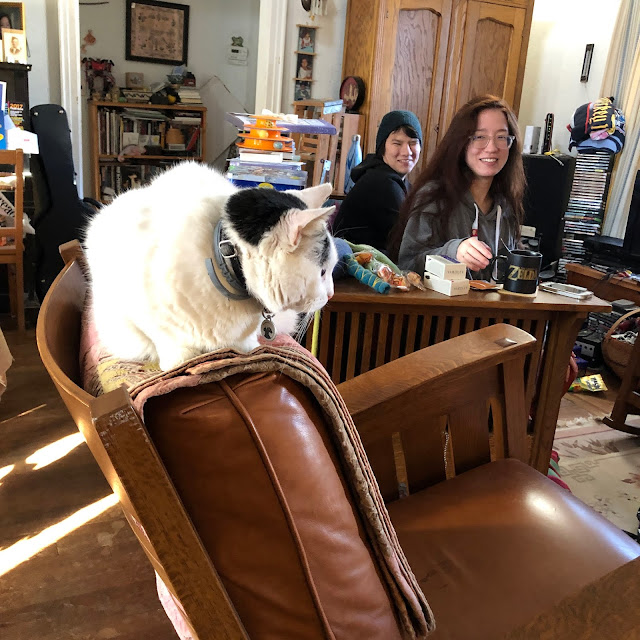 But we opened presents around her, and we also managed to make our annual dumplings the day before. 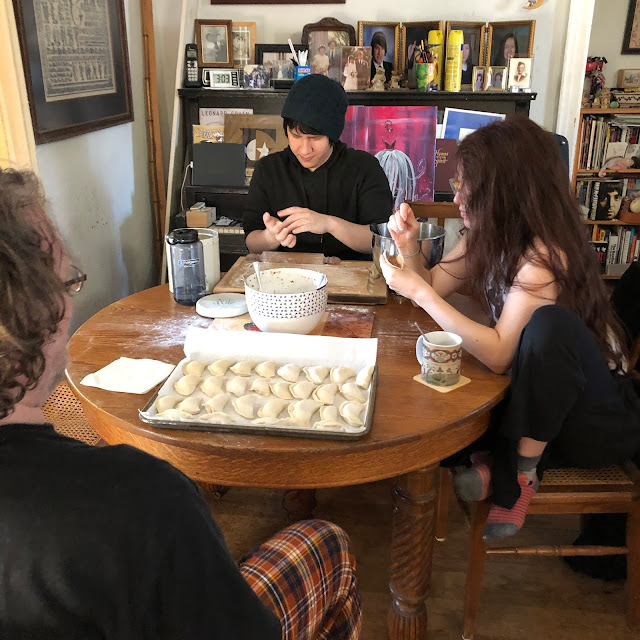 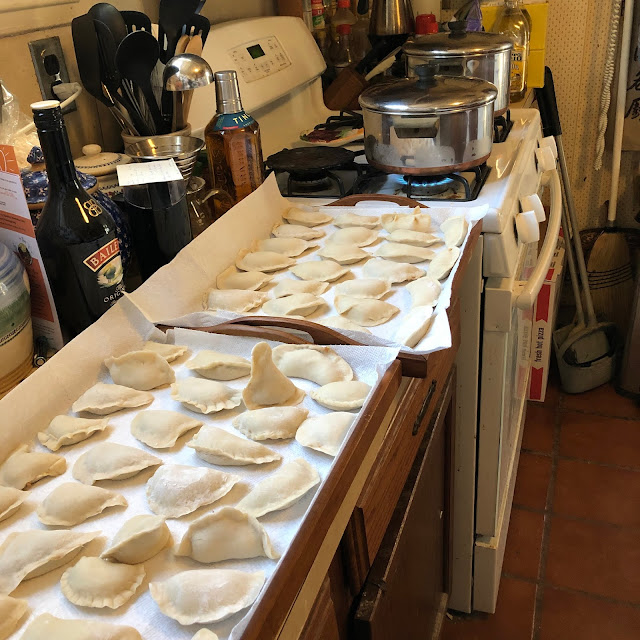 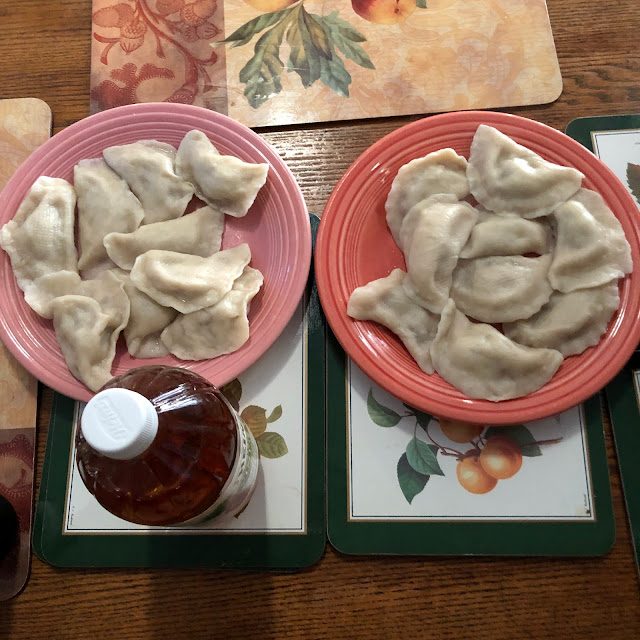 I think DS has officially taken over the kneading of the dough for the skins, and the rolling out of the skins as well.  He loves doing it, and I love the luxury of not doing it.  lol!

The fun part is that DD has again taken up knitting!  She finished a bulky hat from a kit. 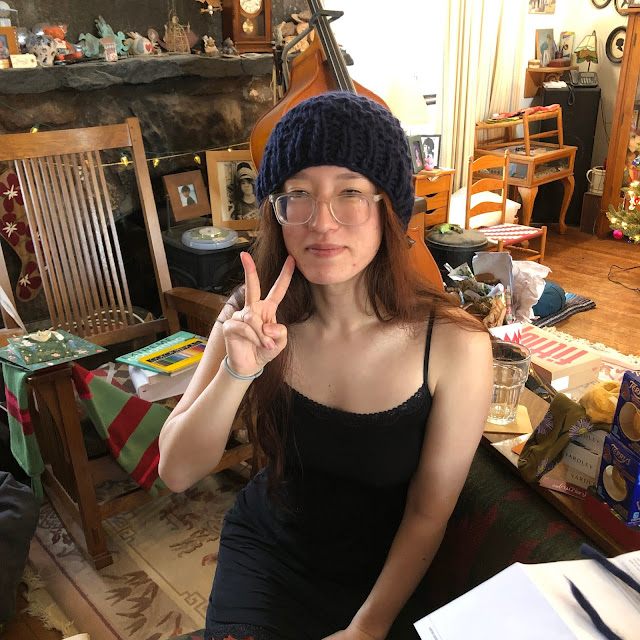 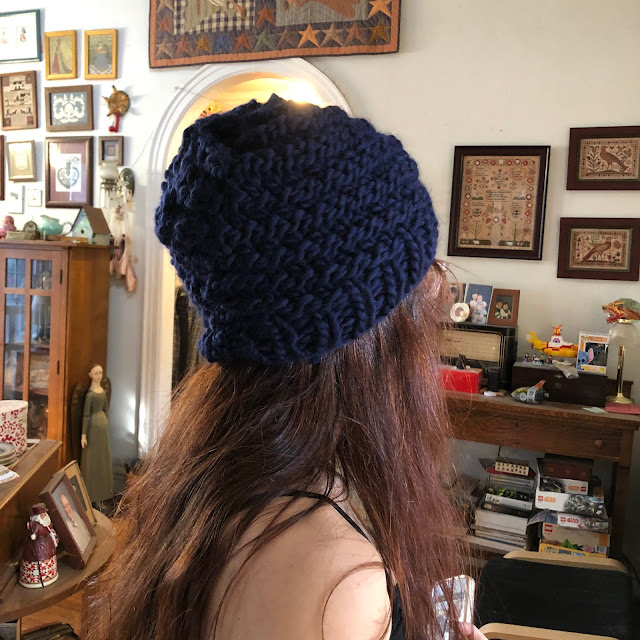 And over Thanksgiving, she picked up the scarf that she had started a few Christmases ago.  I'm happy she is trying knitting again.

And now it's New Year's Eve, which is hard to believe.  Here's to a very happy, very healthy, and very prosperous New Year for us all.  Thanks to everyone who still follows my blog.  :D
Posted by Margaret at 11:46 AM

OMG Margaret! That blanket is amazing! It is truly a work of art!
The colors are just perfect too!
Love the photo of Mia LOL Why do they always sit on the top of the chairs or couch?!?

Must be satisfying that your daughter if following in your footsteps, something she will enjoy even more as she gets older.

Have a very happy and healthy New Year!
Erica

Love, love, love this new blanket! wow! How neat that your daughter is knitting! Happy Blessed New Year to you all!

I started reading your blog when you were stitching more. I don't knit but I find it fascinating what you can do. I used to knit in high school but never finished a project. Then I discovered cross stitch. Happy New Year to you and yours, and the same to Mia from my cats :)

Lovely knit Margaret, you do like your colour work:-)
Happy New Year to you and your family.

All beautiful--and so far out of my skill level. Exciting your daughter is knitting.

Oh, that blanket is absolutely gorgeous--those colors!! I have no idea what any of your knitting descriptions mean, but seeing your amazing knitting this year, I can tell you are an expert. Perhaps teaching via youtube is next, Margaret? That is great that your daughter is knitting, too--she'll learn from the master :) Have you instructed her or has she picked it up on her own?

Looks like a fun family Christmas--so glad everyone could be there. And how nice that your husband enjoys the dough kneading and rolling. What are the dumplings filled with?

Wishing you all a happy, healthy New Year ♥

Color work flat? Drop and pick? Whatever and however, it is AMAZING. Happy new year Margaret!!

your knitting is amazing!! love your postings--happy new year

The blanket is beautiful! And the other finishes as well. You do amazing work! Hope you have a very blessed NewYear!

Happy New Year, Margaret to you and your family. I made dumplings this Christmas, too, with my DDIL, it was so much fun! Gorgeous knitting, as always and your two children are looking gorgeous, too.

Beautiful knitting, as always, Margaret. Very cool that your daughter is joining you in this skill. Happy New Year!

As always I am in total awe of your knitting skills!!! How cool that DD has picked up the needles again.
Happy New Year :)

That blanket Margaret! What a piece of ART. gorgeous. Happy New year!! Looks like your holidays were pleasant and both kids came home. We'll be celebrating the Chinese new Year a couple of days early (the 23rd) and making dumplings with Mailing's family!! YUM

Merry New Year, Margaret! Your knits are lovely. The blanket is going to be stunning. Looking forward to seeing your projects for this new year. Lori

Amazing fair isle knitting! Love it. Happy New Year to you and your family. x

I use a wonky reader on a wonky old phone and stop into my rss occasionally! So, commenting had become relatively hard! But I LOVE and miss my blogging friends and appreciate the updates and seeing they are well! That blanket is a marvel, and the hats are just lovely, Margaret!

Margaret: So many beautiful stitched items, I do wish I knew how to stitch.
I love the dumplings, I love dipping them in oyster sauce.
Happy New Year
Catherine

I'm glad to see you have mastered the fair isle flat! Do you ever listen to Ann at LIFE LDC on you tube. She is a big fair isle knitter and does the most gorgeous Marie projects and is doing the blanket club again this year. Check her out you can find a link on my blog if you are interested. Fun that your DD is knitting, where you guys live you can actually use your knitwear a lot. I have been itching to create a hat with a big pompom. Barrett Wool has some pretty ones if you ever look at Susan B Anderson's website, it's her company with her son. Hope 2020 bring you much happiness with great projects always in your hands. Hugs Mel

I am Regina. I just found your blog, what a nice read! Your samplers are astonishing. I am also a big fan of samplers.

I was wondering - A Parrot, A Leopard, A Lion that is on your blog front cover - do you use the suggested DMC threads or your own conversion? When I saw your colors I was like "wow..." but on the chart's cover the colors look different.

Margaret
I'm a mom of 2 kids, now in an empty nest. Both kids are out in the working world. Been married for over 35 blissful years and have lived in NY for all that time. I love to cross stitch, knit and quilt.